While I was working in the UK, my employers sent me to Osaka in Japan (April 1992) to revise and install a Japanese DOS windowing/printing library I'd written.

Japanese train stations have the strangest billboards. Here's another sample.

English rendered from Japanese is legendary for its strangeness. If anyone can tell me the other purpose of a hair dryer , I'll be eternally grateful. Postscript (thanks to Karen Ide, June 1996): Hair dryers are not to be used for drying clothes. 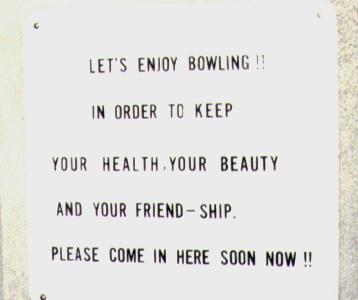 While I was there I decoded the bizarre district-block-number scheme used for addresses and went ten-pin bowling. One of the places I went to was listed in the phone book as Sakurabashi Bowel: Sakura = "cherry blossom", bashi = "bridge", bowel = rather amusing misprint of "bowl(ling alley)". Unfortunately then I got there the misprint was only in the phone book, but they did have this good sign on the wall.

I thought it would be easy going bowling when I didn't speak Japanese. Nope. First they had to communicate that the shoes were obtained from vending machines near the entrance (this was a multi-story bowling alley!), then they had to go find some size 10.5 shoes for me because my feet were sigma-2 by Japanese standards.

I also gave blood while I was there, again not being able to communicate a single word.

Other shopping adventures left me wondering exactly who or what was walking the streets of Osaka.