[Why?] [What's needed] [Where to leave books] [Background] [Latest News] 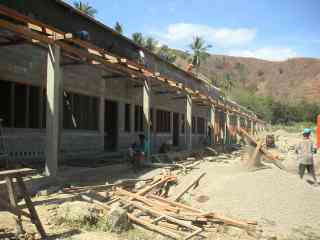 East Timor vies with Afghanistan & Laos for the title of poorest country in Asia. Poverty in East Timor exacerbates the appalling problems in health and education faced by the people. One way of attacking poverty is to improve education. This project aims to get some much-needed textbooks to a university in Dili.

Books in these subjects are needed at the University of Peace. Older texts are fine - there is a big difference between an out-of-date text and nothing. English is preferred, but texts in Bahasa Indonesia can also be used.

Where to leave books

In Sydney:If you'd like to volunteer to be a drop-off point for books in your area, please email me (Fred Curtis, fred@f2.org) to have your details added to this list. I travel to Brisbane, Melbourne, Wagga Wagga & Albury at assorted times during the year, so if you want to collect books in those areas I can arrange to (eventually!) pick them up.

The National University of Timor Loro-Sae (UNTL) currently [2005] has around 7000 students and is stretched to the limit. Various other privately run insitutions have been set up since 2002 to provide opportunities to many thousands of other students. The University of Peace (UNPAZ) is one of these.

Unemployment is running at 70% in Dili, so many young people look to further education as their chance to get the edge. Many of the students in all establishments have come to Dili from country areas.

UNPAZ broke away from the University of Dili (UNDIL) in 2003. The Rector of UNDIL, Mr Lukas da Costa, left with many staff and 1200 students and established themselves in the grounds of a half built Protestant church in Dili. Since then they have used land belonging to some of the staff and built new classrooms which were to be occupied at the beginning of the academic year October 2004.

In their break from UNDIL they had to leave the library, so were without any books. They prefer English texts, but would be able to use Bahasa Indonesia.

This project was started (and this web page created) in September 2005, so there's not much news yet!

The books will be sent from Sydney courtesy of the regular container loads sent to Dili by the Mary McKillop Institute of East Timorese Studies. I'll find out when the next container is due to go and update this page.